Lots of scale insects are active during the heat of summer, but some of these tiny pests are just now beginning to hatch and will continue causing tree and shrub damage in late summer and autumn. From August thru October, magnolia scale (Neolecanium cornuparvum) will be in the crawler stage when the pests are actively moving to locate a permanent residence on the twigs of magnolia trees. This scale insect is found on magnolia trees throughout the eastern U.S. Non-native magnolia species tend to be more susceptible. 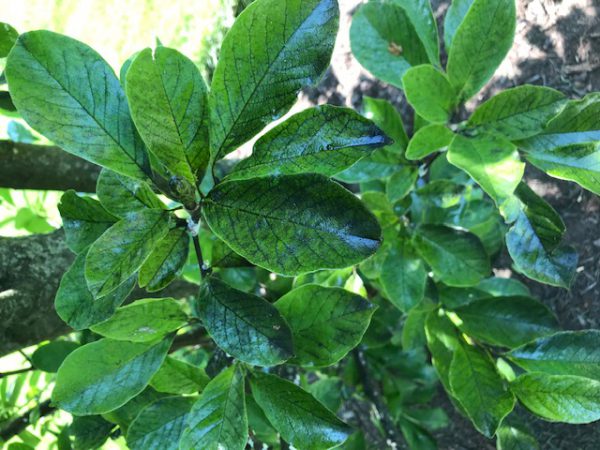 Like other scales as well as aphids, magnolia scale produces honeydew. This sticky substance is a major warning sign of a pest infestation! It is secreted by the insects as they feed on the phloem of the plant. Over time honeydew may be colonized by sooty mold fungi, interfering with photosynthesis and giving plant surfaces an unsightly blackened appearance.

Magnolia scale is a soft scale insect. These insects produce waxy secretions that form a covering on and around their bodies, which protects the scale. During the crawler stage, the insects have not yet developed the protective covering, which is why it’s important to identify now, when it is still susceptible to treatments.

A single generation of scales has several stages per year and emerging crawlers are the only mobile stage of this pest. After the crawlers locate a safe spot to settle down, they begin feeding and do not move again, overwintering before maturing any further. Then, as temperatures rise in the spring, they resume feeding. Juveniles reach adulthood by late summer or early fall, beginning the life cycle again.