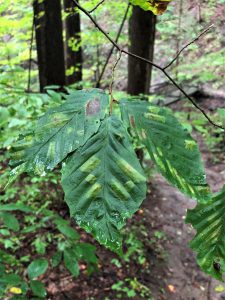 We often don’t think of our trees as getting “sick,” but just as people can contract diseases, trees can too. Some of these diseases have been present for centuries and some are relatively new, or sometimes new to a geographic region. Just as new illnesses are discovered that impact people, new tree diseases also occur and only through study and research do we learn more about the origins of the disease, its impact on plants and potential treatments.

One such recent example is beech leaf disease (BLD). This is an emerging disease of American and European beech that was first observed in Lake County, Ohio (Cleveland area) in 2012. Since it was detected, the disease has been observed in Ohio, Pennsylvania, New York, Connecticut, Rhode Island, Massachusetts, and Ontario, Canada.

BLD is caused by nematodes, microscopic worms, which feed on plant foliage. The nematode, Litylenchus crenatae mccannii, is thought to have been introduced from Southeast Asia, where it is likely endemic. The nematode has been reported on Japanese beech in Japan with mild symptoms. In North America, however, the impact is much more severe. Healthy beech trees have been observed dying in as little as six years from the onset of symptoms.

Early signs include distinct striping between the leaf veins, gall tissue in interveinal discoloration, and darkening and/or chlorosis of an infested area. The symptoms typically progress from the bottom of the canopy upward, but effects can be seen randomly scattered throughout the tree’s canopy.

Looking at the top of the leaves shows interveinal discoloration that is cupped or puckered in appearance. After several years of infestation, leaves become deformed, chlorotic, and have a thickened, leather-like texture. At this point, photosynthetic capacity is limited, and trees cannot produce the amount of carbohydrates needed for overwintering. This results in a general lack of vigor. The disease stresses the tree, and predisposes it to other secondary invaders, such as insect borers and fungal cankers.

There is still much more to learn about BLD as it continues to spread and little information is currently available on management. For now, observation and quarantine with the restriction of moving plant materials is the recommended way to slow down disease progression.