Ghosts in the Forest – Albino Redwoods

A shrub that looks like a white Christmas tree grows at the foot of some redwoods in several old-growth forests in California. Like albino animals, these plants lack pigmentation and have white needles instead of green. Scientists are not sure what the function of these “albino redwoods” is, but they are intrigued.

The plant lacks chlorophyll, making it unable to perform photosynthesis. That makes these albino redwoods an oddity as they are unable to produce their own food, depending instead on their redwood “parents.” They tap into the roots of the nearby “parents” for sustenance and have been considered parasitic to their redwood host. Scientists continue to study these ghost trees and the role they plan in the ecological system. Since very little is known about redwood trees on a molecular and genetic basis, albino redwoods may offer one clue in the puzzle. Despite the fact that little is still known about albino redwoods, these rare ghosts exemplify the beauty and adaptability to be found in the natural world. 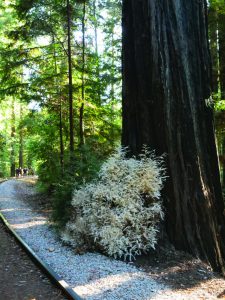 An albino redwood tree in California at the base of a large redwood.