Ginkgo biloba, commonly known as ginkgo or maidenhair tree is often called a ‘living fossil.’ It’s the only survivor of an ancient group of extinct trees in the division Ginkgophyta that are older than the dinosaurs. The proof is found in fossils that date back 270 million years. 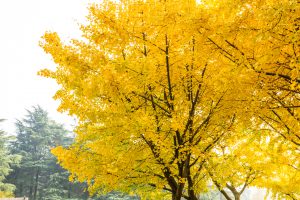 The ginkgo tree in all its autumn splendor.

These days, ginkgo is known as an excellent tree for planting in urban and suburban landscapes where space allows. It can thrive under harsh environmental conditions that would cause many other different tree species to fail. This hardy tree can tolerate concerns like drought, de-icing salts and soil compaction.

Ginkgos have an angular crown and long, erratic branches. They produce deep roots that in turn make the tree very resilient under windy conditions. Young trees are often tall and slender, and sparsely branched with the crown becoming broader as the tree ages. With their powerful combination of resistance to disease and insects and a strong root system, ginkgo is typically a very long-lived tree species.

This tree, however, offers much more than its steadfast reliability. The pretty green leaves have a distinct fan shape with a groove in the middle. In fact, these two parts of the fan are where the name biloba (two lobes) originates. When autumn arrives, the leaves turn a brilliant and bright shade of yellow. Unlike other trees, it is very common for the leaves to drop seemingly all at once resulting in a carpet of gold beneath the tree.

Ginkgos thrive in moist, well-drained soil, but they can tolerate poor soil and difficult conditions. While the tree is hearty, treatment may sometimes be needed for mealy bugs and lesion nematodes as well as disease including fungal leaf spot and root rot. These trees are also dioecious, which means that there are male and female parts on different trees. While ginkgo makes a fantastic specimen tree, females are notorious for producing copious amounts of fruit that emit a foul odor. Luckily, most nurseries sell the male plant.

This fascinating tree is a truly unique and welcome landscape addition for amazing autumn color.