We often promote shrub pruning in winter during the dormant season when its easier to see the branching structure. Indeed, winter is a great time to undertake this task. However, you can prune shrubs year-round. Summer is as good a time as any as long as you pay attention to the particular needs of the species and keep your landscape goals in mind.

Sometimes, weather or other priorities make pruning challenging during the winter.  Not to worry. Here are some helpful tips on breaking the rules when it comes to summer shrub pruning. 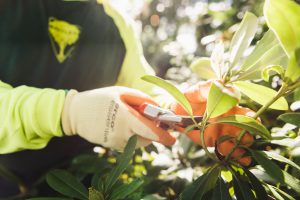 One of the most common goals of shrub pruning is to manage size. You can trim both new and old growth to maintain the plant at an optimal size. Using hand pruners, you can remove the desired amount of current and previous season’s growth. However, it’s important to keep in mind the mature size and natural shape of the plant. During the initial planting, leave plenty of room for shrubs to grow to full size. This will help ensure you do not over prune as the plant grows. Be sure to hold off on any major structural pruning until the dormant season.

Maintenance pruning removes old branches and stems that do not flower well. It also includes eliminating broken, dead or dying branches. You can trim these at any time, ongoing as needed. In fact, during summer, it’s easier to spot defective branches that have not leafed out properly.

Selective thinning when shrubs become too dense improves light and air circulation. This promotes interior growth for a healthier plant with a natural appearance.

That said however, the worst that usually happens when pruning too late is that flowers are lost for a growing season. While there’s obviously a visual impact with reduced flowering, the plant itself won’t be harmed. The only exception is when winter injury occurs, which depends on many factors. The species and its susceptibility to cold plays a big role. Note that winter injury does not often kill entire, established plants.

The same principles apply to sheared hedge shrubs.  Shearing is usually undesirable for a variety of reasons, not the least of which is that late-season shearing tends to encourage tender new growth that will not have time to harden off.  However, the winter injury that might result is rarely fatal to the entire plant.

In sum, if your shrubs really need the pruning, it’s probably be better to do it in summer than not at all and accept the small risks that entails.