Sometimes when a non-native species is introduced to a new environment there is a devastating result. Whether the invasive species is a plant, animal, or pathogen, the presence of these invaders causes ecological or economic harm. Emerald Ash Borer, for example, has killed hundreds of millions of ash trees and now become well-established in North America. More recently, the invasive Spotted Lanternfly (SLF) has made its presence known, steadily increasing its range and causing feeding damage on a wide range of plants and trees since first being discovered in Pennsylvania in 2014. 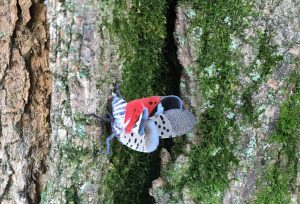 The adult spotted lanternfly is easily identified by the spots on its wings and its crimson hindwings.

Contrary to its name, this insect isn’t a fly, but a planthopper. They can hop powerfully over short distances, but are also able to fly relatively far and high. Since its debut in Pennsylvania, SLF is now being seen in Delaware as well as in New Jersey, Connecticut and Rhode Island. Washington state has also reported a sighting.

A beautiful but deadly insect, it feeds on trees using its needle-like mouthparts, called a stylet. The mouthparts insert into plant tissue and suck up sap like a straw. As they feed, the insects excrete a sticky substance called honeydew that facilitates the growth of sooty mold (a fungal disease) and attracts other insects. SLF breeds in large numbers and often feeds in large groups so they are easily seen, frequently congregating at the base of a host tree. 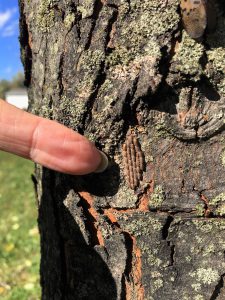 Spotted lanternfly egg masses should be scraped off of trees.

If you are in an area where this pest is prevalent, be on the lookout for egg masses, which are easily seen clinging on to bark. They can be scraped off and should be double-bagged and thrown away. Insecticides can be applied to control SLF effectively as well. If you find SLF in an area where it has not yet been reported, please report it immediately to aid in the control of this invasive pest.