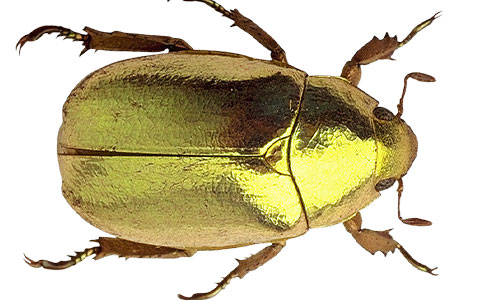 Prevent your trees from dying when metallic wood-boring beetles infest your area. By knowing how to identify these destructive beetles, you can take action to protect and treat your trees.

72tree.com assembled the following information on metallic wood-boring beetles (jewel beetles), the damage they cause to trees, how to protect your trees, and who to call when you identify their presence.

Jewel beetles or metallic wood-boring beetles are members of the Buprestidae family of beetles, consisting of over 15,000 known species. The larvae of this immense beetle family are known as flathead borers. These beetles possess the following traits:

Appearance – Beetles have six legs and short antennae. Nearly all adult jewel beetles will have some metallic coloration on their body. In contrast, the brightest coloration typically appears under the wing covers (elytra) or on the insect’s underside.

Size – These beetles are generally cylindrical or elongated to oval, with lengths from .12 to 3.15 in; most species are under .80in.

Feeding Habits – Adult beetles of the Buprestidae family feed on their host tree’s foliage, causing little damage to the tree.

The larvae of these beetles burrow through the bark, roots, and stems of multiple species of trees and woody plants to reach the cambium (water and nutrient delivery system of the tree).

Some of the more well-known jewel beetles include:

For important information about the emerald ash borer, read 72tree.com/emerald-ash-borer-tree-damage/ 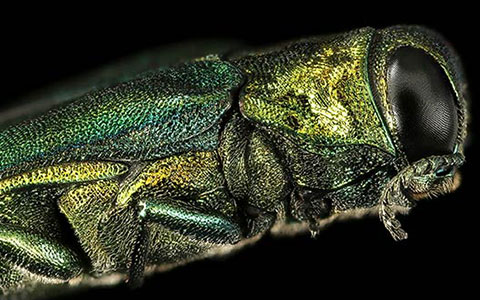 As with most beetle species, their life cycle can be separated into 3 distinct phases, including:

Adult – In spring and summer, adult beetles emerge from their host and feed on its foliage while searching for a mate. Adult jewel beetles are typically short-lived, living only for a few weeks.

Egg – Females lay eggs in crevices in the bark of the same or a nearby tree.

Larva – After hatching, larvae bore into the host until reaching the nutrient-rich cambium of the host tree, where it feeds, grows, and pupates.

Most species have one generation per year or take multiple years to develop. However, some species may produce multiple generations per year.

While visual confirmation of adult beetles is best, the following symptoms indicate that a metallic wood-boring beetle infestation is occurring:

•Partially consumed foliage (Leaf notches)
•Chlorosis of foliage in sections of the crown
•Dieback of foliage and stems
•Frass (sawdust) found on the bark from burrowing activities
•D-shaped exit holes in tree bark
•Bulging or vertical splits in the bark (over larval galleries)
•Suckers and water sprouts growing in the crown, on the trunk, and/or from the roots
•Woodpecker damage (woodpeckers hunt beetle larvae)
•Squirrel activity (some squirrel species feed on beetle larvae)
•Adults found in traps

Combined, the beetle’s different stages’ feeding habits will leave a tree with damaged, wilting foliage, and in rapid decline.

As larvae continue to feed, they channel through their host’s cambium layer in a zigzag or ribbon pattern. This feeding ultimately leads to a partial or total girdling of the host, resulting in hydraulic failure and death. 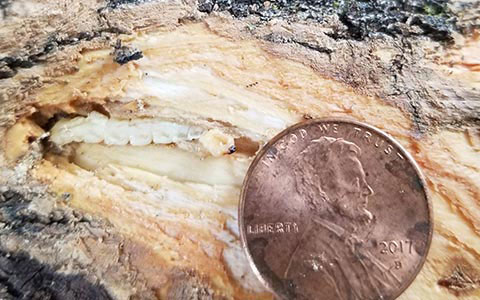 Affected Tree Species – Some tree species especially susceptible to wood-boring beetles in the Buprestidae family include:

Generally, Buprestidae prefer attacking trees and woody plants in decline or dying. However, a number of the species will attack “green,” flourishing specimens. An example of this is the emerald ash borer (EAB), which has decimated the ash tree population in many parts of the US and continues on the move.

Note: Many wood-boring beetle species seek, attack, and infest specific tree families like the emerald ash borer that attacks those species within the ash family. 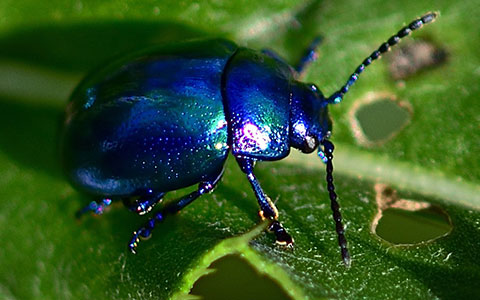 Due to their larvae’s hidden feeding activities, preventing a metallic wood-boring beetle infestation is not always possible. However, the following practices will help reduce the risk of an infestation:

Your trees’ care includes the safe removal and destruction of infested, diseased, and dying trees from your property and surrounding areas.

Most of the time, wood-boring insects are secondary invaders (successfully attacking a tree already in decline). For a tree, the first line of defense against any infestation is to keep them healthy. Proper care of trees and woody plants discourages many borer pests. Good sap flow from healthy, vigorous trees, for example, defends the plant from damage by many borer pests.

If you have confirmed a boring insect infestation on or near your property, immediately contact an ISA certified arborist to evaluate your property’s risk and recommend a course of action.

Note: If you are inclined to use chemical treatments on your trees or as a ground soak, allow a professional to apply it. To chemically stop or prevent a boring insect infestation, such products must be applied correctly and at the right time.

In this article, you discovered essential information about metallic wood-boring beetles, their appearance and life cycle, how to identify an infestation, and how to prevent or control these deadly beetles.

By taking swift action to prevent or control a jewel beetle infestation, you are helping all of the trees on and around your property.

When you allow a wood-boring beetle infestation to go unchecked, you can be responsible for devastating infestations spreading far beyond your property.

This article was first published on: http://www.72tree.com/metallic-wood-boring-beetles/