Optimal Times to Prune Your Tree 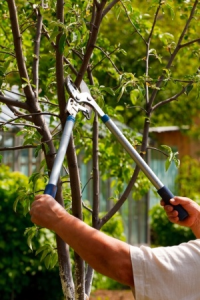 When is the last time you pruned a tree? Pruning involves removing specific branches or stems off a tree in order to benefit it as a whole. By removing dead, damaged or diseased branches, for instance, you’re helping to prevent insects and other organisms from entering the tree and making it sick. In many ways, you can think of pruning a tree like a person gets a haircut every once in a while. Without getting a haircut, a person would look a bit odd, don’t you think? Trees, when on a person’s property, are much the same way– every now and then they could use some pruning, which is really just a fancy way of saying upkeep and shaping, much like a haircut…or in this case, a branch cut.

Light pruning of a tree can be done any time of the year, especially if your purpose is to remove dead wood. Generally, however, pruning is best done in the winter or the summer.

During the winter, a tree is dormant, as if it were asleep for the season. After the coldest part of winter passes, then it’s a good time to do some pruning. Don’t worry if a tree “bleeds,” whereas its sap begins to flow– you’re not harming the tree if you see sap.

Summer is a good time to prune in order to direct the growth of branches. In other words, prune for “corrective purposes” getting rid of defective limbs and/or ones that hang down too low and get in your way.

Do you want to enhance flowering for a particular tree? The best time to prune for that is right after their springtime blooms fade away. If they bloom with flowers in mid-to-late summer, then prune them for flowering purposes in winter or early spring.

Fall is the season when you should not prune trees. During this season, decay fungi love to spread their spores all around, and you don’t want them ending up in the healing wounds of a cut tree, right?

If you have specific questions about tree pruning, call Big Foot Tree Service at 973-885-8000.