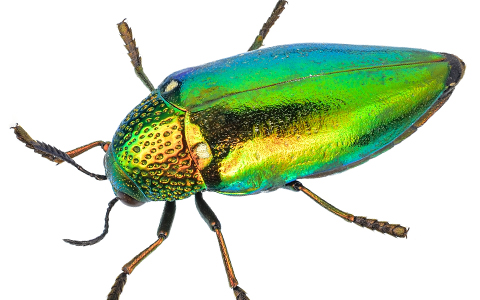 72tree.com gathered the following information to help you identify tree-boring beetles, the damage they do to trees, how to treat them, and how to prevent beetle infestations.

Borers tunnel into trees to feed on their inner wood. Symptoms can be slightly different depending on the borer, but in general, these critters create holes in tree bark, leave behind sawdust or sap and cause leaf discoloration and branch dieback, and can ultimately kill the tree. Consider the following:

Emerald ash borer (EAB), Agrilus planipennis, is an exotic beetle discovered in southeastern Michigan near Detroit in the summer of 2002. The adult beetles feed on ash foliage but cause minor damage. The emerald ash borer’s larval stage is responsible for the damage that leads to the host tree’s death. The larvae’s feeding under the tree bark eventually interrupts the tree’s ability to transport water and nutrients from the roots to the tree’s foliage, causing ash tree decline and death.

The emerald ash borer has decimated over 40 million ash trees in Michigan alone and tens of millions throughout other states and Canada. Small (younger) trees can die as soon as one to two years after an EAB infestation, while more mature infested trees can survive three to four years. Without intervention and preventative measures, an EAB infestation is 100% fatal to the host.

Vulnerable Tree Species – All eastern North American ash species are susceptible to EAB, including green, white, black, blue, and pumpkin ash trees.
Infestation Signs – Thinning and yellowing leaves, D-shaped holes in the bark, and severe canopy and bark loss
Treatment – Injection by a professional pesticide applicator (or a certified arborist) is the best option for trees greater than 48 inches in circumference (15 inches in diameter). Sprayed and poured insecticides are not as effective.
Prevention – It is challenging to prevent an initial EAB infestation of an individual tree. But you can prevent EAB from spreading to other trees. The only way to prevent your ash trees from falling victim to EAB is to treat them. Untreated ash trees are a significant contributor to EAB’s spreading.
Information/Reporting – If you suspect you’ve seen the emerald ash borer or ash tree damage caused by a potential infestation, report it immediately by calling 1-866-322-4512. You can also report your findings online at aphis.usda.gov/aphis/resources/pests-diseases/hungry-pests/Pest-Tracker

Note: You can also report an EAB sighting or infestation by reaching out to your county’s Extension office or a designated state representative found at emeraldashborer.info/reporting-eab.php 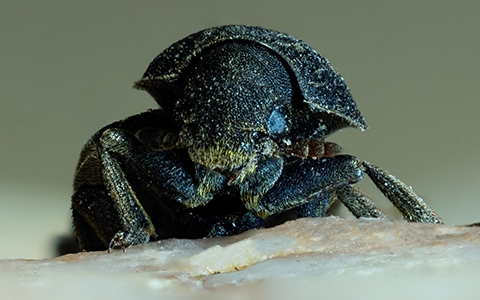 The mountain pine beetle (MPB) is a bark beetle species native to the forests of western North America from Mexico to central British Columbia. It has a hard black exoskeleton and measures approximately 1/4 inch (the size of a grain of rice). MPB is the most aggressive, persistent, and destructive bark beetle in the western United States and Canada. MPB affects pine trees by laying eggs under the bark. The beetles introduce blue stain fungus into the sapwood preventing the tree from repelling and killing attacking beetles with tree pitch (sap).

Vulnerable Tree Species – Ponderosa, lodgepole, white bark, limber, sugar, blue spruce, bristlecone pines, and several other pine species.
Infestation Signs – Signs of MPB infestation include white pitch tubes, running pitch, “sawdust” at the base of the tree, and multiple small emergence holes in the bark. During warmer months, these beetles can kill a tree in two to four weeks.
Treatment – Removal. Cut and destroy infested trees along with a wide buffer strip of healthy trees.
Prevention – The only treatment that can be applied to the tree is preventative. This will protect the tree by killing the beetles before they infest it. Insecticides containing the active ingredients permethrin or carbaryl and labeled for bark beetle control should be done by early June to protect trees from MPB.
Information/Reporting – If you suspect an MPB infestation, hire an arborist to confirm the infestation, begin treatment and removal efforts, and contact local authorities to help contain the beetle’s spreading.

Buprestidae, also called Jewel Beetles, comprise any of some 15,000 beetle species (insect order Coleoptera). These beetles are primarily distributed in tropical regions and are among the most brilliantly colored insects. Buprestidae adult beetles feed on their host tree’s foliage, resulting in little damage to the tree. The larvae of these beetles burrow through the bark, roots, and stems of multiple tree species and woody plants to reach the cambium (water and nutrient delivery system of the tree).

Can Trees Recover from Borers? 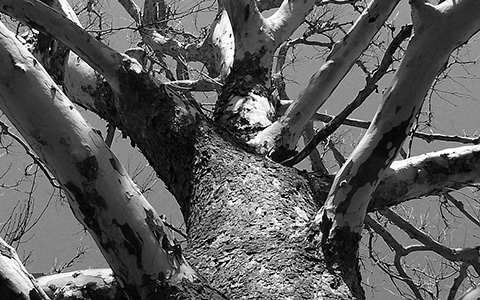 Sometimes. Tree-boring beetles are attracted to trees that are already stressed and injured (pruning wounds are common entry points for first-generation borers). Adding mulch around your tree and providing it with consistent waterings and seasonal fertilization can help it fight off or resist borers while recovering from previous damages.

Note: When you see signs of decline or bark damage (entry/exit holes or woodpecker damage), call a certified arborist to evaluate the situation and recommend a course of action.

In this article, you discovered essential information on identifying a wood-boring beetle infestation, the damages they can cause trees, how to treat and prevent infestations, and who to call for help.

Knowing how to identify, treat, and control tree-boring beetles will help you prevent or stop severe infestations from killing stands of trees on and around your property.

Ignoring beetle infestations can result in the quick death of your trees and property damage if said tree falls on your home.

This article was first published on: http://www.72tree.com/tree-boring-beetle-description-and-prevention/