The two are synonymous: trees and the Pacific Northwest. From the coastal Cedars to the Coast Range Sitkas, and the pines east of the mountains, Oregon and Washington are home to a wide variety of evergreens and deciduous trees alike. Many trees have been in the area for hundreds of years and buoyed the region economically since the 1800s.

The growing seasons in the Pacific Northwest have contributed to the proliferation of different kinds of trees – some native and other not-so-native. However, the effects of climate change are being seen throughout the region. Increasing temperatures and droughts are beginning to alter the length of the growing season.

Unfortunately, trees haven’t been able to adapt to the new shortened growing times. These effects are being seen in trees throughout the region, although not in the way you might think. Yes, prolonged droughts can weaken trees, spreading disease and attracting boring insects. But recent studies have shown a more alarming trend.

In a recent study of Central European trees, it has been discovered that trees are growing bigger because of extended growing seasons. In some cases, an extra three weeks of growing means trees are growing faster. Unfortunately, the trees aren’t keeping their density and are becoming weaker.

If tree density had remained constant, that would mean more lumber for construction and carbon storage from the air. But these trees have lost up to 12% of their density according to the study, which investigated trees that had been closely monitored for more than 100 years in some cases.

So while the trees seem to be growing more, there is actually less tree there. The weaker trees aren’t able to stand up to storms as they once did, the lumber taken from these trees isn’t as strong, and they absorb carbon at less than 50% of the normal rate. While some of that may be mitigated by more trees and faster growth, the lifespan of those trees is also lessened.

Locally, trees are showing signs of climate change as well. Because of less precipitation, trees aren’t able to function as they are supposed to. The Western Red Cedar is unable to take what it needs from carbon before releasing it. Birch trees begin losing leaves sooner without being replaced and the tree begins to brown from the top down.

In both cases, boring insects are taking advantage of the weaker trees. These insects lay their eggs on the bark of the tree, and when the larvae hatch, they bore into the tree looking for nutrients. After tunneling for a year or two, they leave the tree and the process starts again.

While trees have been adversely affected by climate change, they may also be the best way to fight it, too.

What can be done? 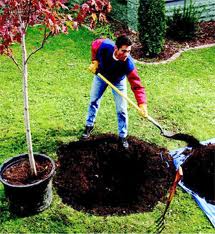 According to a study published in the journal Science, planting a trillion trees is the cheapest and most effective climate change solution. The thought process is more trees means more carbon absorption, scrubbing emissions from the air. If this global planting initiative were instituted to tackle climate change, it could cut carbon up to 60 percent of the man-made greenhouse gas emissions from the atmosphere.

That’s a lot of trees – but there is enough room to plant these trees without disturbing existing forests or farmland. In some areas of the world, actions are being taken. Ethiopia recently planted 350 million trees to help stem the tide of climate change. But other countries, including Australia, the United States, China – three countries with enough available land to lend a hand – need to join the fight.

Of course, this is just one way to fight climate change. Using less gas, oil, and other man-made pollutants would be a huge way to lessen the amount of carbon dioxide and carbon emissions from the atmosphere, as would decreasing deforestation around the world, mostly in Brazil. It will take a truly worldwide effort to make the needed changes to help the Earth.

Want to do your part to help plant a few of those trillion in your own urban area? Contact Urban Forest Professionals. We consult with homeowners on which trees to plant and where as well as maintaining the trees you already have through trimming, pruning, and other services that will keep your trees looking great and cleaning the air we breathe.